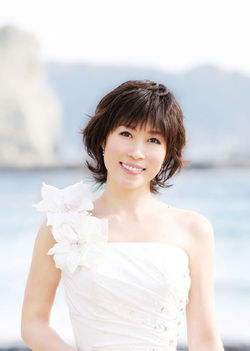 Mizumori Kaori (水森かおり) is a Japanese Enka singer under the agency Nagara Production and the label Tokuma Japan Communications.

Mizumori got her start when she won the grand prize in the Chiba Terebi Karaoke Daishou contest in middle school. After graduating from high school, Mizumori didn't pursue a music career but went to college at Josai Daigaku. While in college, she got a chance to study abroad in America, a dream she had since she yearned for New Kids on the Block's Joey McIntyre as a teenager. One night, after performing karaoke at her host family's family party, Mizumori decided to go back home and pursue a music career.

In 1995, Mizumori made her singing debut with the single "Oshiroi Hana". It wasn't until 2002 when Mizumori got her big hit when she released the single "Toujinbou" (named after basaltic cliffs in Fukui Prefecture) due to a large amount of fans supporting the single. Because of this, Mizumori has appeared on Kouhaku Uta Gassen every single year since then. She gained another hit a year later with the single "Tottori Sakyuu" (named after the famous sand dunes of Tottori Prefecture). After the single's release, Mizumori was given the title of "Queen of Songs About Local Places" because of her songs are based off local places in Japan.

Mizumori has won various awards throughout her career. In 2005, she won the Best Song Award at the 47th Nihon Record Taishou. She also won the grand prize for Best Enka Song at the FNS Kayoukai for "Kumano Kodou" (2006) and "Hitori Satsumaru" (2007).