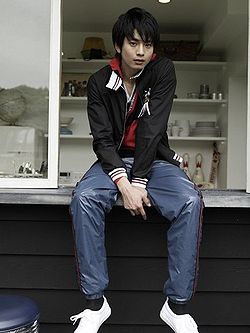 Mukai Osamu is a Japanese actor with Hori Agency.

Before debuting as an actor, Mukai attended Meiji University, majoring in genetic engineering. In 2004 he won the 29th International Animal Genetics Society of Japan's Best Poster Award. At this time, he was aiming to help engineer better modern medicine, and during all of this he worked as a bartender for six years. After being ranked #4 in the Ikemen Ranking for a magazine, he was scouted and made his acting debut in a commercial for Minute Maid.

His drama debut came in January 2006 with a bit part in Byakuyakou for one episode. After that he had minor roles until Bambino! in spring 2007, when he played a chef as a supporting role. From there he took on yet more supporting roles, and in early 2008 he was cast as Mayama Takumi, part of the central cast for the drama Hachimitsu to Clover. He played the easygoing and eco-friendly Yoshikawa Naoki in Seigi no Mikata, and in Mei-chan no Shitsuji the butler Shinobu, who would do anything for his lady. He was also part of the main cast in Atashinchi no Danshi as the fourth-oldest brother.

Mukai has also made film appearances; he was part of the supporting cast in Gachi Boy and had minor roles before that. He can be seen next on the big screen in 2010 as Taira Yoshiyuki in the film adaptation of BECK alongside his co-stars from Mei-chan no Shitsuji, Sato Takeru and Mizushima Hiro.

On April 22nd, 2010, Mukai was involved in a car accident in which he ran into a car parked at a stop light. Mukai stated the light had already turned green, and while he had thought the car in front of him was already moving he was mistaken. The couple in the car that was hit are said to be taking Mukai to court for neck injuries. It is not known at this time whether this will affect his acting work.[1]