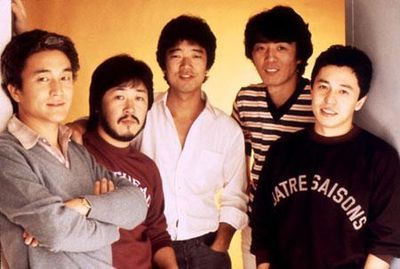 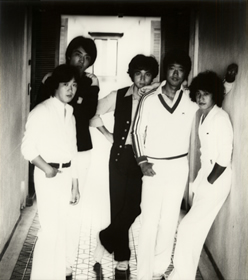 The group started out as a quintet in 1984 when second year high school students Oda, Suzuki, Jimeshi, and Sudo played at an arts festival. The drummer Sudo would soon quit the group a year later for unknown reasons. After graduating from high school two years later, Oda and Suzuki went off to college but that didn't the stop the band from performing. During holidays, the group would practice in Suzuki's workplace at an auto shop garage. They also went onto to hold a folk music festival called "FOLK SONGS no ..." from 1966 to 1968.

OFF COURSE got their break in 1969 when they entered and placed second in the Yamaha Light Music Contest. Inspired to win first place, the group went onto to compete in various music competitions such as the Miyagi Preliminary Contest in August and the Tohaku District Final Tournament a month later where the group placed first. The group went on to advance for the national competition, LMC Nationwide Grand Prix Competition, two months later. They didn't achieved their dream of getting first but settled on second place in the contest.

The group went onto to score a record deal with Toshiba EMI after winning second place in the contest. They released their first single, "Gunshou no Naka de", on April 1970 under the name THE OFF COURSE. They group's name came from the English meaning of the Japanese expression "mochiron", which means "of course".

Before the year was up, Kobayashi joined the group as the bassist in October. But in 1971, the other bassist, Jimeshi, called it quits. The group joined the agency Pacific Enterprise and released their second single by the end of 1971. OFF COURSE continued to play at festivals around Japan including the Eight Person's Recital in November 1970 and the Tokyo Music Festival in 1972.

The group was renamed as OFF COURSE in 1972 when they released their third single, "Osaraba". After that release, Yoshida joined the group for a year as the chorus in April of that year. But, Kobayashi quit as the group's bassist by the end of the year. The group later starred in their first concert "Off Course Concert In Yokohama" by the end of the year. They also held their first tour, entitled "Love Generation Concert", and released first album, Off Course 1 / Boku no Okurimono, the year after.

By to the mid and late 70s, OFF COURSE kept on releasing singles, albums, and had a concert every few months, including the famous OFF COURSE recitals. Their first encore happened at the end of 1976 when they were playing at a women's college, marking their first rise in popularity. They also appointed Muto Binshi to be the director of the group in 1975. After the release of their eighth single, "Hitori de Ikite Yukereba", in 1976, Muto recruited former Janet member, Ohma Jiro, to be the drummer for the group's recording sessions. They hired another drummer, Shiroma Masahiro, who was in the group from 1978 to 1979 and played for the group's live concerts. At the same year, OFF COURSE formed their own company, entitled "OFF COURSE Company".

The band once again changed their line up in 1979 by adding bassist Shimizu and guitarist and harmonica player Matsuo to the group. Also, Ohma was promoted from recording drummer to the band's own drummer. The three new members' first appearance made a impression in the group when they release their first debuting single. "Sayonara" became the group's first top ten hit, reaching #2 on the Oricon charts, by the end of the decade.

By the start of the 80s, OFF COURSE continued to score some top ten hits but also had some singles, like "Toki ni Ai wa", that flopped and only reached on the bottom of the top 50s. Original member Oda Kazumasa released his first sound produced album by the end of 1980, entitled Waga Kokoto no Tomo, for the group Iruka. Also, Suzuki Yashiro and Ohma Jiro followed in Oda's footsteps and produce albums for other groups.

A year later, the group also travelled international and performed in Los Angeles. They also were featured in a documentary produced by NHK about their concert series "Wakai Hiroba". They also appeared on a TBS special a couple months after and on the NHK program NEXT. They also played at the Nihon Budokan in 1982 and announced that the group was taking a break from performing live. But this didn't stop the group from their amassing popularity when their next album, I LOVE YOU, was the third album to reach #1 on the Oricon charts (after over and We are).

After the success of I LOVE YOU, Suzuki Yashiro became the group's first member to go solo with the single "Ai wo Yoroshiku" and album Sincerely by August 1983. A few months later, Suzuki quit the group to focus more on his solo career. A year later, the group switched labels and went from Toshiba EMI to Funhouse.

OFF COURSE started off 1985 by going to America to record their first ever English album for three months. They still continued their music careers in Japan by releasing their next single, "call", a couple months after they came back. They went on to perform for the charity concert Live Aid in July, performing the song "ENDLESS NIGHTS".

They released their first English album in August 1985, entitled Back Streets of Tokyo. The album fared really well among their fans and was the sixth #1 album to top the Oricon charts. They also released their only English single, "ENDLESS NIGHTS", by the end of 1985.

In 1986, Matsuo Kazuhiko went on to start his solo career and debuted with the single "Futsuu no Office Lady" in July. This caused the other members to start their own solo careers with Oda releasing his first single, "1985", and Shimizu releasing his own single, "Ue wo Muite Arukou", and started his own solo project the next year. By the end of the year, the group performed at a John Lennon memorial concert.

In 1987 and 1988, the group released a handful of singles and album when they announced that they would be breaking up in 1989 to let each member focus on their own solo careers. The group disbanded on February 1989 after performing for the last time at a special concert in Tokyo Dome, entitled "A Night with Us".

There has been no reunion of the group since their breakup in 1989. However, there was a mini reunion when Matsuo, Shimizu, and Ohma got together in 1999 to formed the group Acoustic Beatles Club.