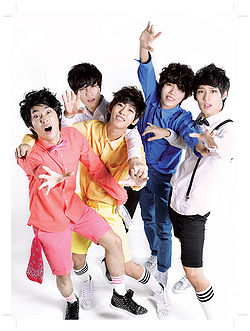 PURE (퓨어) is a Korean pop 5-member boy group that debuted in 2013 under Pure Entertainment. Before officially debuting in Korea, the group had held showcases in Japan and free charity concerts for TVXQ fans at the Seoul Myeondong Pure K-Pop Live Concert Hall, promising to hold 100 concerts before their debut. Chanhwee, Jungbin, and Soohyeok left the group and the company. By the end of December a new member Giho was added to the group. It has been told that the members will redebut under different entertainment.