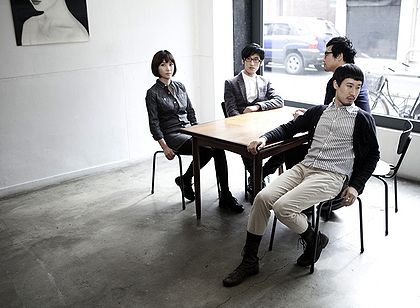 Peterpan Complex (피터팬 컴플렉스) is a Korean band under Showmust. They debuted in 2002 as an indie rock band, however after a three year hiatus, in 2011, they made their comeback with a much more electronic sound.

Peterpan Complex was first formed in May of 2000 due to an ad placed outside the campus performance center of the Seoul University of Art. At this time, the band consisted of Jun Ji Han on guitar and vocals, Kim Yong Rin on guitar, Noh Deok Rae on bass, and drummer Hwang Jeong Gwan.

In July 2001 at the 2001 Soyosan Rock Festival, the group won the grand prize award in the general category for their song, "Jawihaengwi". The group began pursuing music in full time.

In November of that same year the band's lineup changed. Kim Kyoung In joined on drums, and Jun Ji Il joined the band as the bassist. With this new lineup, the band performed at the 5th Bud Rock Festival as well as contributing a song to the 5th Bud Rock Compilation Album.

In January 2002, the band's lineup changed again when guitarist Lee Gyo Won joined the group. With their lineup in place, the group began performing in clubs in Hongdae, centering on the club Jammers. Around this time, the band also began performing at larger events as an opening act.

In August of 2002, they took part in the Rock Dalgui Ureumsori Festival and contributed a track to the album of the same name ("Jawihaengwi")

In October, the band released their debut mini-album, 1 Inching Juingong Shijeom, as well as contributing a track to the compilation album, To Be Glorious. The band performed at the "Oh! Pilseung Rock Korea!" concert, and continued to perform at Jammers in Hongdae.