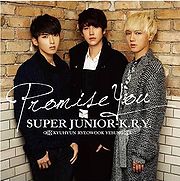 "Promise You" is the Japanese debut single released by Super Junior K.R.Y.. It was released in three versions, a CD+DVD edition, a regular CD Only edition, and a CD Only edition only sold on mu-mo store and on their official fan-club website. The single was released as a "Winter concert memorial single", and the title track was first performed during their Japanese tour on November 15, 2012.

The single reached #2 on the Oricon charts and charted for 8 weeks.