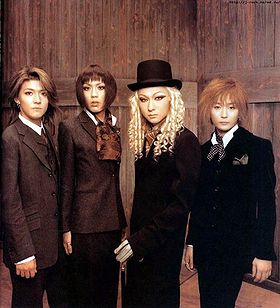 Raphael was formed in March on 1997 by bassist Yukito and leader/guitarist Kazuki. Kazuki went to karaoke with Yuki he found that he loved Yuki's voice and asked him to join the band. Later they met Hiro and asked him to join. Hiro had a tough decision between attending school or joining the band, but he eventually decided on the latter. After Hiro's younger sister, who had admired Yukito discussed it with him, he decided to join. They only played for 2 years in Indies scene, they went major in mid 1999. But in 2000 they decided to break up, they played their "Graduation Live" at Nippon Budokan on March 4th. On October 31st, 2000, the leader Kazuki passed away from a tranquilizer overdose. Their music was mostly rock ballads and used the cello as well as guitar & basslines by Kazuki & Yukito. They reunited in 2012 for two concerts and released a mini-album and a live album. They also came back together in 2016 for a final tour and released three best albums throughout the year.