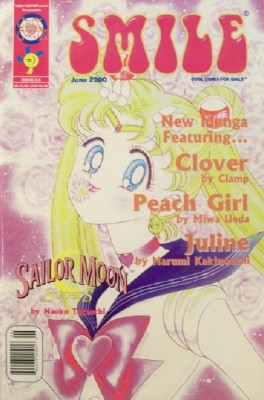 SMILE was a an North American-based, monthly shojo manga mangazine, published by Tokyopop. The magazine was started back when Tokyopop was known as Mixx Entertainment, with the first issue hitting stands December 1998. The magazine was filled with girl-related content much like Seventeen, as well as having installments Sailor Moon Super S. A couple issues later an American-manga was added to the line up, Sushi Girl. In May 2000 (Vol.2 #2), the magazine started to become more manga orientated, and added Kakinouchi Narumi's Juline and Ueda Miwa's Peach Girl to the line-up.

Over the next few years, the magazine added several successful shojo comics to its pages. Although in July 2002, Tokyopop decided to cancel SMILE. The remaining series were then released solely in graphic novel format.

These are the series that were still running when the magazine ended.