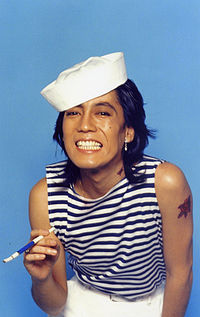 Sawada Kenji is a Japanese singer and actor who was a member of popular Japanese bands such as The Tigers and PYG as well as a solo artist.

Sawada Kenji was born at his parents' home on June 25, 1948. At the time, his father worked in a research facility for gunpowder. His name was originally "澤田研", but as he was his parents' second son, he was renamed "澤田研二". When he turned 3, he moved to Sakyo-ku, Kyoto to the house of relatives where he was brought up.

In 1966, the group Funnys was formed and Sawada was the main singer where he chose the nickname Julie. The group's name changed to "The Tigers" before their first television appearance on November 15, 1967. The group was one of the most popular groups of its time, with hits such as "Mona Lisa no Bishou" or "Kimi Dake ni Ai wo". The group disbanded in 1971 after their final concert at the Nippon Budokan.

Afterwards, Sawada formed the supergroup PYG made up from members of some of the most popular bands of the time. He was one of the lead singers of the group with Hagiwara Kenichi who used to be his biggest rival.

After PYG disbanded, Sawada started his solo career and launched his acting career.