"Seven Deadly Sins" is the second digital single and fourth single (fifth overall) released by MAN WITH A MISSION. It was released in a limited CD+DVD edition and a regular CD Only edition. The title track was used as the opening theme for the anime Nanatsu no Taizai. The song "Falling" was used as the CM song for Shiseido "The Koragen". The single reached #2 on the Oricon charts and charted for 19 weeks. 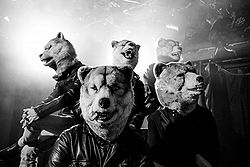 MAN WITH A MISSION promoting the single