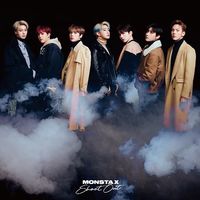 "Shoot Out" is the fifth Japanese single released by MONSTA X. It was released in three versions: a limited CD+DVD edition (A), a limited edition (B), and a regular CD edition. The title track is the Japanese version of the Korean song originally found on their second Korean album Take.1 - ARE YOU THERE?.

The single is certified Gold by RIAJ for shipment of 100,000 copies.