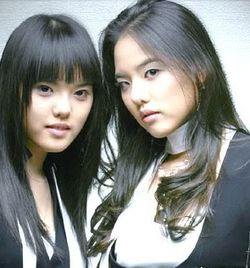 Shyne (샤인) was a Korean R&B duo comprised of twin sisters Sunny and Bonnie. They debuted in Korea under DSP Entertainment in 2004 and in Japan under Nexstar Records in 2006. As the duo as been inactive since December 2006 is most likely that they had unofficially disbanded.

Born in Texas and raised in Los Angeles, the Korean-American twins displayed their talent for music at a young age. When they were only five, they learned how to sing, compose music, and write lyrics. The pair sang in their church's gospel choir and with the help of their musician father, also learned the piano, guitar, bass, and cello.

After sending their demo CD to numerous Korean companies, the girls signed with DSP Entertainment where they were allowed artistic involvement in their album. They debuted in January of 2004 with the song "Too Late". The sisters' combination of strong vocals, Hip-Hop and R&B style, and twin appeal garnered them much attention and praise. After their follow-up song, "S.O.S.", the girls faded from the K-pop scene to work on their next project.

Two years after their Korean debut, Shyne debuted in Japan with the mini-album Best Friend in May of 2006 followed by a single release in December.