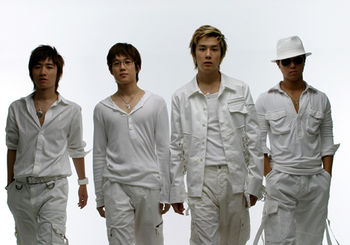 TAKE (테이크) was a four member Korean pop boy group that debuted in 2003.

TAKE initially started out as a 5-piece group. Though the group's debut was successful, the group did not release anything for almost two years.

During that time, the group took some time off to improve their vocal abilities and was trained under the supervision of Naul, of Brown Eyes. Also, during their two year break, Lee Min Hyuk left the group to pursue an acting career. For their second release, the now 4-member group developed a more mature sound focusing more on the R&B genre.