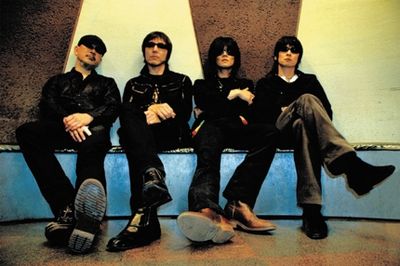 THE PRIVATES is a Japanese rock band that formed in 1983.

THE PRIVATES formed in 1983 after Nobuhara, Tetsuka, and Morihara met each other in Tokyo. Later on, the band added keyboardist Yoshida Manobu soon after and Takahashi Tatsuya in 1986. The band released their only one indies single, CITY COCKTAIL, in 1985 before they signed with Toshiba EMI to release their first major single, Kimi ga Suki Dakara, two years later in 1987. Before the decade was up, THE PRIVATES went to Bogalusa, Louisiana to record their third album, entitled SPEAK EASY. They also recorded their fifth, sixth, and ninth albums in Louisiana.

While the band was changing agencies in 1991, Yoshida quit as the band added a new guitarist, Ichijo Tooru. But three years later, the band took a hiatus while Nobuhara did a Eurasia tour. The rest of the band would later meet up with Nobuhara in London to do a eighteen day tour around London, England. Meanwhile, their contact with Toshiba EMI expired in 1996 with no option of renewing. Then in 1998, the band signed a new contract with a new label, FAITH A&R, and began to release new music.

In 2004, the band celebrated their 20th anniversary by doing a special live at SHIBUYA-AX.