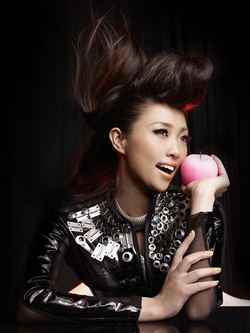 TIGARAH is a Japanese electro-hop singer-songwriter, who is signed to the Universal Music Japan record label. She got her start as an independent artist in 2003, but later signed to a major label in 2006.

TIGARAH majored in political science at Tokyo's famed Keio University. It was here that she considered becoming a politician or ambassador, but decided that she could best speak her mind through music. After school she started to write lyrics in her small Tokyo apartment.

She was inspired by baile funk music from Brazil. TIGARAH took several trips to Sao Paulo and Rio, where she immersed herself in Brazilian culture, and she recorded music with local artists. During one trip to Rio, she was introduced to Mr. D, whom was there on a South America tour. The two started to record music together in 2003.

In 2006, TIGARAH and Mr. D released her debut record, TIGARAH ep. The record was completely written by the two, and was self-released worldwide through TIGARAH's website, for the price of $7 (with a promotional button and "autographed" photo included). During this time she also posted over a 100 remixes of her songs for free download on her website. TIGARAH started to garner press attention and appeared in several magazines such as the L.A Times, Dazed & Confused UK, XL8R magazine, Blender magazine, NPR, 91X. By the end of the year she was offered a record deal by Universal Music Japan.

Over the next two years she wrote and recorded new songs. Many of the songs written during this time had heavy influences from electro and new wave. She continues to blended together all kinds of genres with her clever rhymes, covering topics such as culture clash, fake people, and defending your own style.

In 2009, TIGARAH made her major label debut with the mini-album, TIGARAH!. This release was long in the making for TIGARAH and was mentioned many times, but was pushed back. The album was original slated to be called Revolution, but was later change. Four months after her major debut, she released her first full-length album, The Funkeira goes BANG!.