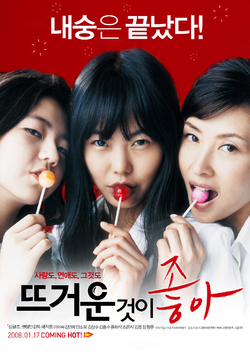 Tteugeoun Geosi Joha (뜨거운 것이 좋아; also known as Some Like It Hot or Hellcats) is a South Korean film directed by Kwon Chil In and written by Kim Hyeon Su, Kim Soo Ah, and Park Hye Ryeon. It is based on Kang Mo Rim’s comic strip "10, 20, 30" and starred actress and fashion model Kim Min Hee, actress Kim Ji Hoon, and Wonder Girls singer Ahn Soo Hee in the film’s lead roles. It was released on January 17, 2008.

Tteugeoun Geosi Joha is a story that follows 3 characters' struggles with life and relationships beginning with Ah Mi (Kim Min Hee), is a 27 year old freelance writer struggling with her career and love life. She lives with her 41 year old older sister Young Mi (Kim Ji Hoon), who is a single mother with a teenage daughter Kang Ae (Ahn So Hee), due to not having enough money to live on her own. On a whim, Ah Mi goes on a blind date with Oh Seung Won (Kim Sung Soo) despite already having a boyfriend Nah Won Suk (Kim Heung Soo), who is a member in an unsuccessful rock band and always broke. The blind date ends up being positive, with Seung Won being perfect marriage material. However, Ah Mi feels guilty since she is already in a relationship until she goes to her boyfriend’s house only to discover he is cheating on her. She breaks up with Won Suk and begins to date Seung Won yet begins to feel conflicted on whether to stay in her unstable writing career or get married and be rid of her struggles. Ah Mi’s sister Young Mi is an interior designer who meets an actor named Choi Kyoung Soo (Yoon Hee Suk), yet she gets unconfident about her new found love after discovering she has menopause. And Young Mi’s teenage daughter Kanga Ae get’s confused about her sexuality after she accidentally kisses her best friend Mi Ran (Jo Eun Ji).