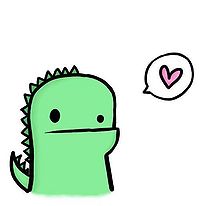 How Saki thinks she looks like. She's crazy tho...

Saki (咲) is a Dinosaur. She's married to Kamenashi Kazuya, although she's having a romantic affair with Kim Yoo Kwon. She hasn't debuted yet, because she has no talend at all.

Hello, Ciao, Hallo, RAWWR♥ I'm Saki. An annoying and totally crazy person dinosaur, that is just obsessed by J-Pop, J-Rock, K-Pop & Mandopop. I also have a mother mons†er, that I adore and love very much ! Yea...the word weird was invented to describe me. Oh yea I also love Dramas, Anime, Manga and I have a romance with my PS3 WHAT IS LIFE? When I don't fangirl over ugly, gay, dump and srsly just gay asians, I go shopping and buy thinks I actually don't need. I'm really good at talking too much and talking about thinks that nobody cares about (you see?).

Well, I joined generasia, because I wanted to share my "knowledge" (omg) about some of these little groups/artists, that aren't represented here... or for entrys that could have much more informations. I would be glad, if you improve when I did something wrong, It's not the first time that I join a Wiki (it's the 3th time tho), but we all make mistakes. (I guess)