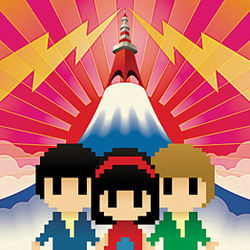 YMCK is a Japanese chiptune band with use of the 8-Bit Nintendo Famicom (NES) sound in heavy influence of jazz. They are signed under avex trax in Japan and Pastel Music in Korea.

YMCK formed in May 2003. 8-bit Nintendo meets jazz, is the basic concept of YMCK, whose sound is built on the raw single tones of old game consoles, especially 8-bit Nintendo. While the sound is cheap, the song compositions are influenced by jazz from the 1950's and 1960's, with a clear and feather-light 4-beat rhythm underlying sophisticated harmony progressions. The experimental combination of these two features has resulted in the unique YMCK sound, which is neither techno music nor jazz.