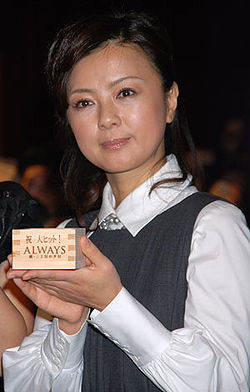 Yakushimaru Hiroko (薬師丸ひろ子) is a Japanese pop singer and actress. Yakushimaru got her start in show business in 1979 when she auditioned and starred with Takakura Ken as the heroine in the television dorama movie Yasei no Shuumei. She soon later starred in the movie Sailor Suit to Kinkanjuu two years later. She also release the theme song, "Sailor Fuku to Kikanjuu", to the movie soon after, signaling the start of her music career. The single and her appearance in the movie made Yakushimaru a major hit.

In 1991, she married Tamaki Koji until they divorced seven years later. She later won her first Japan Academy Award for Best Supporting Actress in the movie Always Sanchome no Yuhi.