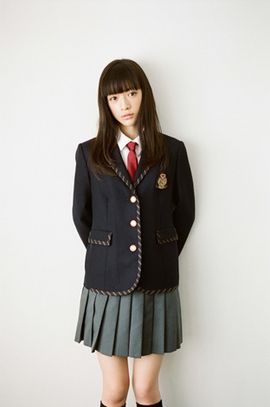 Yuuki Mio (優希美青) is a Japanese actress, fashion model, and singer represented by Horipro. She is the grand prix winner of the 37th Horipro Talent Scout Caravan.

Throughout grade school, Yuuki played the clarinet as part of the brass band. She counted Ishihara Satomi as one of her favorite talents.

In 2012, Yuuki emerged the victor out of 29.521 participants in Horipro's 37th Talent Scout Caravan, which aimed to find an all around idol who can sing, dance, and act. As winner, she participated as a vocalist in several Japanese Disney Princess themed albums singing a cover of "The Glow". In October the same year, she made her television debut in a commerical appearance promoting Kyocera Tech, and released her first photobook in November. She went on to make her acting debut in the 2013 Fuji drama Kumo no Kaidan.

Yuuki currently servers as an exclusive model for teen fashion magazine "Pichi Lemon". She was to release her debut single in March of 2015, which has now been indefinitely postponed.