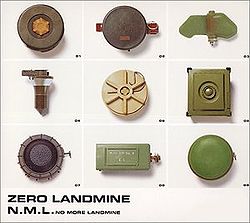 ZERO LANDMINE is the single released by the collaboration group N.M.L. to promote the ban of landmines. It was used as the Zero Landmine Campaign song and all the profits from the sales of the single were donated to the campaign. The song was produced by Sakamoto Ryuichi, David Sylvian wrote the English lyrics and Murakami Ryu translated it into Japanese. The main song longs for about 18 minutes and that's why it was only performed once on TV. The PV features the short version. This single reached #7 on the Oricon charts in its first week and #1 on the two following weeks, and charted for 14 weeks. It sold 556,150 copies, becoming the #28 single of 2001.