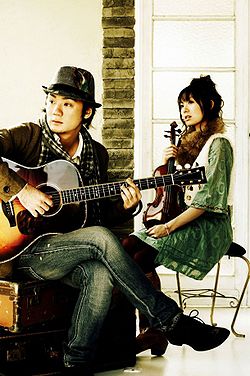 alüto is a Japanese pop duo that formed in 2005. They released their debut indie single, "Michi", in 2006. It was later re-released as their debut major single under Sony Music Associated Records in 2007 as "Michi ~to you all", and it was used as the second ending theme for the anime NARUTO: Shippuuden. On January 21st, 2009, alüto released their debut major album, Uta to Guitar to Violin. The duo announced a hiatus in late 2009. Meanwhile, on June 9, 2010, the violinist Sato Honoka began a solo project, releasing her first solo album Wedding Kiss, under the name Honoka. They disbanded in 2010.