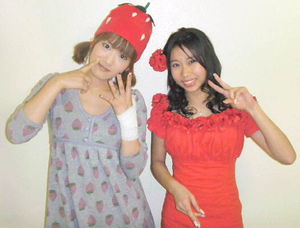 amU is a Japanese pop idol group from Osaka. The group started on Septemember 2007 when aco and meru met in Osaka. The released their first single, entitled "Capsule Girl", less then a year later on July 2008. They also began to release two songs, "Glueck Glueck" and "Secret Call" on iTunes in 2009. By the end of the year, they released their first album.

However, the group is currently on hiatus since March 2010.