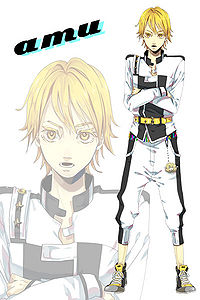 amu(あむ) is a Japanese pop singer and a member of the group PointFive(.5) who gained attention through Nico Nico Douga video sharing network. In December 2010, he made his solo debut with the mini-album Mu. Like other Nico Nico Douga artists, not much of his personal information is revealed.