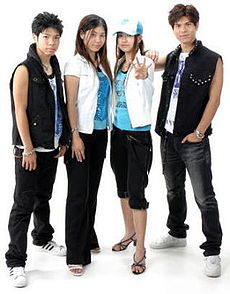 bless4 is a brothers-sisters four member Japanese pop group formerly signed to BMG JAPAN. The group is known for performing along with AKINO's successful song Sousei no Aquarion.

bless4 was formed by Kawamitsu brothers and sisters in United States. In the year 2003, they made their major debut in Japan with the single Good Morning! Mr.Sunshine under BMG JAPAN label. After the release of their debut all ALL 4 ONE in 2005, BMG JAPAN terminated their contract due to low sales. In the same year, AKINO debuted as a solo singer under Victor Entertainment with the Sousei no Aquarion. The song became popular in 2006-2007 by reaching high on Japan's digital charts. Since her debut mini-album Lost in Time, AKINO started to credit her stage name as AKINO from bless4 to promote bless4. The group also served as background vocalists and performers for AKINO in various live events.