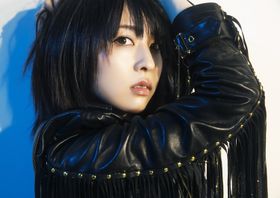 Ayano Mashiro (綾野ましろ) is a Japanese-pop singer signed to SACRA MUSIC. In 2014 under Ariola Japan, she made her debut with the single "ideal white", which served as the opening theme to Fate/stay night [Unlimited Blade Works]. Her second single "Vanilla Sky" released on April 29, 2015, which is used as the opening theme to the 2015 anime series Gunslinger Stratos. "infinity beyond", Ayano's third single, was released August 19th, and was used as the theme song for the Gunslinger Stratos Reloaded PC game.

Her fourth single, "Lotus Pain", was released on August 3, 2016, and is used as the ending theme for D.Gray-Man Hallow. Her first album WHITE PLACE was released on October 5th.

Her seventh single "Shoudou" is released this week on May 16th.