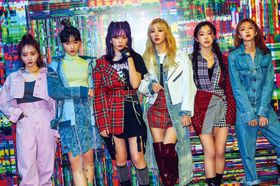 Dreamcatcher (드림캐쳐) is a Korean pop girl group under Dreamcatcher Company. They debuted as 5-member group MINX in 2014. They released their debut single "Uri Jibe Wae Watni?" on September 18, 2014. They made a comeback in July 2015, with the mini-album Love Shake, which was to be their last release as MINX.

In November 2016, their company announced that the group were to re-debut in 2017 under the new name Dreamcatcher with the addition of two new members. They released their first single "Akmong" (Nightmare) on January 13, 2017, the first of several releases following the theme "Seven Nightmares." They are best known for their rock-inspired music and horror-inspired themes which set them apart from traditional girl groups.

Their third Japanese single, "Endless Night", is released this week on March 11th.