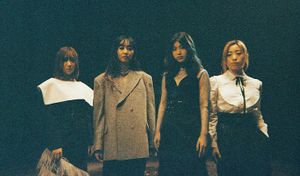 Akai Ko-en (赤い公園; Red Park) is a Japanese pop-rock all-girl quartet band under EMI Records Japan. Their music is a blend of melodic pop and shoegaze accentuated by ferocious hardcore and noise. Guitarist Maisa Tsuno is responsible for all lyrics, composition and arrangement of their songs.

Performing live in front of an audience is something the band cherishes above all else. Their label encouraged them to consciously prevent and remove all music and video footage of themselves on the internet. Their CDs can only be purchased directly at shows. The group says they are not opposed to being on the internet, but they would like to decide when and how. The band relies on word of mouth and they are well-known around Tokyo for their energetic performances.

They released their first major album Laundry de Hyouhaku wo in 2012.

Their fifth album, THE PARK, is released this week on April 15th.