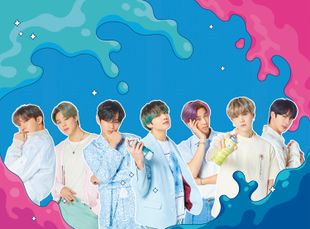 BTS (방탄소년단, 防弾少年团) (also known as Bulletproof Boy Scouts or Bangtan Boys) is a Korean pop/Hip-Hop 7-member boy group that debuted in 2013 under Big Hit Entertainment. Currently, the group has eight albums that have ranked on the U.S. Billboard 200 chart, with four consecutive albums reaching the #1 spot, making BTS the fastest group since the Beatles to earn four number one albums in less than two years. They are the first Korean act to achieve the feat as well as have songs certified Gold by the Recording Industry Association of America. The group has six million-selling albums, having sold an estimated 20 million albums worldwide since their debut, with the album Love Yourself Gyeol 'Answer' currently holding the Gaon Album Chart all-time monthly record, the biggest selling Korean album by month in 16 years. BTS has also won several New Artist of the Year awards and multiple daesang awards for Album of the Year and Artist of the Year. BTS is the best-selling artist in South Korean history and holds the best-selling album in South Korea with Map of the Soul: 7.

BTS has won Top Social Artist three years in a row and Top Duo/Group at the 26th Billboard Music Awards. The group is the first Korean group to win a BBMA. Featured on Time's international cover as "Next Generation Leaders", BTS has appeared in the magazine's 25 most influential people on the internet (2017–2019) and Time's 100 most influential people in the world (2019), with the outlet giving them the nickname "Princes of Pop". Forbes Korea listed them as the most retweeted artist on Twitter, and Forbes Korea named BTS the most influential celebrities of Korea in 2018 and 2020. BTS also ranked 43rd in the Forbes Celebrity 100 in 2019 as one of the world's top-earning celebrities and was also #1 on the 2018 Forbes Korea Power Celebrity list.

BTS are ranked #4 of Billboard's Top Social Artist of the 2010s, and are the highest group on the list. Billboard also placed BTS #1 on their Social 50 chart, making them the first Korean group to top the chart, where they have spent 180 weeks at #1 to date. BTS earned a spot in the 2018 edition of the Guinness World Records for "having the world's most Twitter engagements for a music group". They were also revealed to be the most tweeted about celebrity in 2017, being "liked or retweeted over half a billion times (502 million)" worldwide.

During their Love Yourself World Tour, BTS became the first Asian and first non-English speaking act to headline and sell out Wembley Stadium, and broke the record for the single highest-grossing engagement in Rose Bowl Stadium history. Billboard ranked BTS at #45 on their Top Touring Artists of the 2010s list, being the highest-ranked Asian as well as the only non-English speaking act on the list. As of 2019, BTS are purportedly worth more than $4.65 billion to South Korea's economy each year, or 0.3 percent of the country's GDP. BTS attracted one in every 13 foreign tourists that visited South Korea and were cited as one of the key acts boosting global music sales to $19 billion in 2018.

Their fourth Japanese album, MAP OF THE SOUL: 7 ~THE JOURNEY~, is released this week on July 15th.