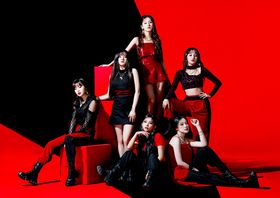 (G)I-DLE ((여자)아이들) is a Korean pop girl group formed by CUBE Entertainment They debuted on May 2, 2018, with their first mini-album I am and its lead single "LATATA". (G)I-DLE was dubbed the "monster rookie" of 2018 and has been considered one of the most successful South Korean girl groups to not hail from the "big three" record labels. Since their debut, the group has released three mini-albums and five lead songs including "LATATA", "HANN", "Senorita", "Uh-Oh", "Oh my god" and their promotional song, "LION", with all of them reaching the top ten on Billboard's World Digital Songs chart. The group has also stood out for their direct involvement in their music, with their leader Soyeon and members Minnie and Yuqi writing and co-producing their material. In conjunction with the release of their third mini-album, I trust, in 2020, the group signed with American record label Republic Records to pursue expansion into the U.S. marketplace.

Their second Japanese mini-album, Oh my god, is released this week on August 26th.