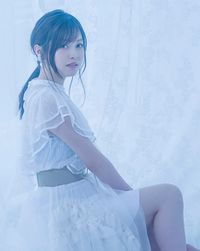 Suzuki Konomi (鈴木このみ) is a Japanese pop singer signed to Music Factory who debuted in 2012. She was the winner of the fifth annual Animax Anison Grand Prix. Her debut single "Choir Jail" was the opening theme to the anime Tasogare Otome x Amnesia and peaked at #34 on the Oricon charts.

Suzuki made her first appearance at foreign anime convention at Anime Festival Asia in Singapore in November 2016. During a birthday live held at Makuhari Messe on November 5, 2016, it was announced that she will make her voice acting debut as the heroine of a new anime project produced by Mages.

Suzuki cites the character Sheryl Nome from Macross Frontier as her inspiration for making music for anime. Her music has been featured in anime series such as Sakurasou no Petto na Kanojo, Watashi ga Motenai no wa Dou Kangaetemo Omaera ga Warui!, No Game No Life, and Re:Zero kara Hajimeru Isekai Seikatsu. She has also performed in events in Japan such as Animelo Summer Live and Animax Musix, and at international events in China, Germany, the United States, and Southeast Asia. In 2018, Suzuki made her voice acting debut, playing the role of Rin in the anime television series Lost Song.

Her 19th single, "Maiorite Kita Yuki", is released this week on September 2nd.