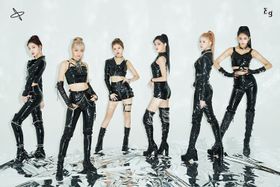 On March 18, 2019, EVERGLOW released their first single, "ARRIVAL OF EVERGLOW", with the lead single "Bon Bon Chocolat". They enjoyed commercial success with their release; the single debuted and peaked at #6 on the Gaon Album Chart, selling more than 23,000 copies as of September 2019, while "Bon Bon Chocolat" debuted and peaked at #5 on the World Digital Song Sales Chart, selling 5,000 copies in the US as of August.

On August 19, 2019, EVERGLOW released their second single "HUSH" with the lead single "Adios". The song received over 100 million views as of August 2019. Due to the success they received, the group won their first music program broadcast award on SBS' The Show on September 24th.

EVERGLOW released their first mini-album reminiscence on February 3, 2020, with the lead single "DUN DUN". The song marked the group's first appearance on one of Gaon's single charts, reaching #63 on the component Download Chart, while the mini-album debuted at #4 on the Album Chart and sold over 27,000 copies in its month of release.