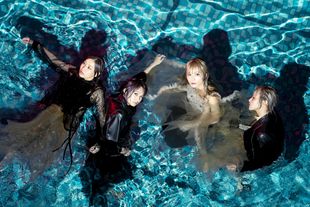 SCANDAL promoting Kiss from the darkness (2020)

The band has performed the theme songs for many anime, including "Shoujo S" for BLEACH, "Shunkan Sentimental" for Hagane no Renkinjutsushi FULLMETAL ALCHEMIST and "Yoake no Ryuuseigun" for Pokémon the Movie XY Hakai no Mayu to Diancie|Pokémon. With numerous overseas performances and anime theme songs, SCANDAL has built a considerable international fanbase.

On December 24, 2018, it was announced the band had created their own private label "her" and would release content under it beginning in spring 2019.

Their ninth album, Kiss from the darkness, is released this week on February 12th.