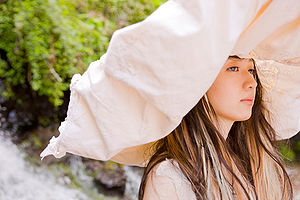 lela (レラ) is a Japanese pop singer signed to Sony Music Entertainment. She made her major debut in 2009 with the mini-album Hadaka no Tsuki. Her stage name lela is derived from an Ainu language word which means "wind".

According to an interview in 2009[1], lela suffered from anthropophobia in her childhood and had troubles communicating with other people. When she was a kid, lela did not leave her house and spent time expressing her heart through music. She was discovered at the age of 14 and spent nine years of training before making her debut. In the year 2009, she signed to Sony Music Entertainment and debuted with the mini-album Hadaka no Tsuki. However, due to her health problem, lela did not appear in the music video of "Hadaka no Tsuki" and currently has no plan of live performances.