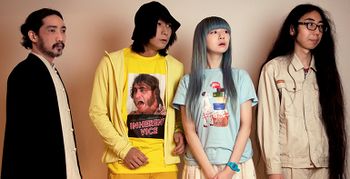 macaroom is a Japanese electro-pop band under Kiishi Bros. Entertainment.

macaroom was founded by vocalist emaru and composer Asahi. They make and play pop music adopted from "phonelyrics", studied by Asahi. This relates to the sound function of words. The band also worked on a project to transform one of John Cage's works into pop. The band's music incorporates algorithmic composition, particularly when performed live. This composition style links music with biochemistry and complex science systems. These systems are constructed by "Bob" Akiyama Daichi, a sound designer and sound scientist.

macaroom often includes the Chinese martial art Kung-Fu in their live performances and music videos, performed by Kung-Fu master Kiishi Minami. He was the gold medalist at the 2011 World Kung Fu Championship held in Taiwan.