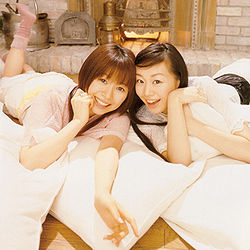 tiaraway （ティアラウェイ） was a Japanese pop seiyuu group composed of Nanri Yuuka and Chiba Saeko, with music produced and written by Shikura Chiyomaru. The group was formed in 2003 when they recorded the ending theme song "Usual place" for the anime Memories Off 2nd. They disbanded in 2005.