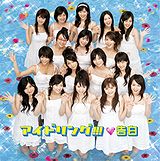 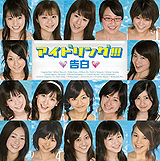 Kokuhaku is Idoling!!!'s third single. Kokuhaku was used as the Microsoft Windows Vista campaign song. It was released in two versions: a limited edition with a DVD and a regular edition. The regular edition included a trading card randomly selected from a set of 20. It reached #9 on the Oricon charts, charted for seven weeks and sold 24,763 copies.