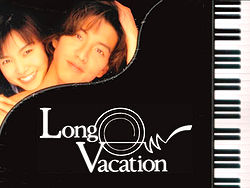 Long Vacation is a Japanese romance drama that started airing on the 15th of April 1996. A DVD was released at a much later date. The series ran for 11 episodes and won multiple awards at the 9th Television Drama Academy Awards.

Sena (Kimura) is a college graduate who dreams and has the potential of becoming a world class pianist. However, his lack of confidence prevents this from happening and instead, teaches at a local piano school. Sasaki-sensei (Morimoto) is Sena's former professor at the college and is always encouraging Sena to perform at the next piano competition.

Minami (Yamaguchi) is an out of work model. On her wedding day, she's left waiting at the altar by her fiance and loses all of her savings, which she gave to her fiance. Her fiance turns out to be Sena's former roommate. Minami rushes to Sena's apartment to finds out that her supposed husband-to-be has skipped town. With no money and no where to go, she moves in with Sena.

Sena likes Ryoko (Matsu), a very talented pianist and college sophomore. He likes her a lot, but just doesn't have the courage to ask her out. Momoko (Inamori) is Minami's best friend and is also a model, providing much of the comedic relief in the show. Shinji (Takenouchi) is Minami's younger brother who just happens to be better than Sena on the piano. However, Shinji doesn't want to become a pianist, opening a bar/nite club instead. Rumiko (Ryo) is Shinji's girlfriend and Takako (Hirosue) is one of Sena's students.