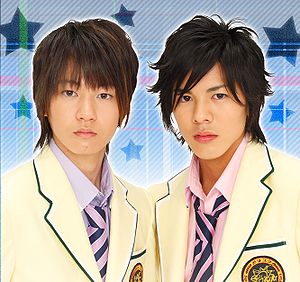 SHIPS was a Japanese pop boy group produced by Up-Front Agency, signed under the zetima label. The unit was formed to promote the anime Kirarin☆Revolution. In Kirarin☆Revolution, SHIPS is the super idol unit formed by members Kazama Hiroto and Hiwatari Seiji. As with MilkyWay and Kira☆Pika, the voice actors for these characters formed a real-life unit. The songs "Love×Mega" and "Hikari no Naka e..", which appear on the first two Kirarin☆Revolution Song Selection albums, were recorded by Akio Sayuma and Souichiri Hoshi, the original voice actors for Hiroto and Seiji, respectively. It was not until these two were replaced by Ide Takuya and Kanai Shikou that the real-life unit began releasing singles and appearing at promotional events. Ide and Kanai released two singles before the anime, and the unit, ended. They also recorded a new version of "Hikari no Naka e.." for use on Oha Star.