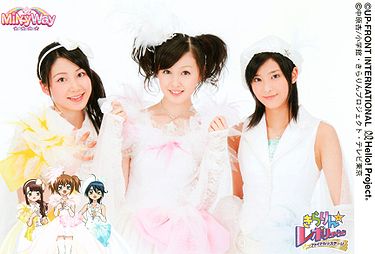 MilkyWay was a Japanese pop girl group produced by Up-Front Agency, signed under the zetima label, and part of Hello! Project. Their singles were used as opening themes for the anime Kirarin Revolution.

MilkyWay was formed in March 2008 for the anime Kirarin Revolution, which Kusumi Koharu starred as the voice of Tsukishima Kirari. She was joined by Hello! Pro Egg members Kitahara Sayaka and Kikkawa Yuu, who were the voices of respective characters Yukino Noel and Hanasaki Cobeni. Their characters were featured as MilkyWay in the anime up until Kirarin ended in May 2009.