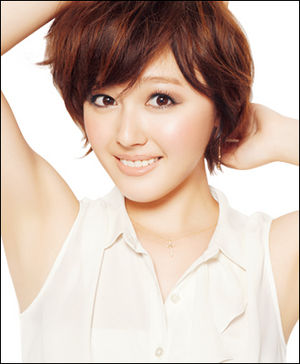 Kusumi Koharu (久住小春) is a Japanese pop singer, talent, and fashion model managed by Just Production. She was formerly a member of Morning Musume and Hello! Project, and an exclusive model for CanCam magazine.

Kusumi Koharu joined Hello! Project on May 1, 2005 as the sole member of Morning Musume's seventh generation after passing the Morning Musume Audition 2005. She was first featured on the single "Iroppoi Jirettai", on the studio album Rainbow 7, and made her concert debut on May 7, 2005 at Morning Musume's 2005 Spring concert tour.

Her big break came in 2006, when she was cast as the voice of Tsukishima Kirari, the main character in the anime Kirarin☆Revolution, which ran for three years and ended in 2009. She gained a solo debut as "Tsukishima Kirari starring Kusumi Koharu" with the single "Koi☆Kana". Her singles were used as opening and ending theme songs for the anime. In addition, fellow Hello! Project members Hagiwara Mai, Kikkawa Yuu, and Kitahara Sayaka lent their voices to prominent guest characters. Kusumi and Hagiwara formed Kira☆Pika in 2007, and Kusumi, Kikkawa, and Kitahara formed MilkyWay in 2008 until the show's end on March 27, 2009. On June 3, 2009, a one-shot manga titled "Miracle☆Revolution ~Kusumi Koharu Monogatari~" was published in Ciao magazine and covered her idol life. Thanks to Kirarin, Kusumi is currently a regular cast member on Oha Star.

On September 19, 2009, Kusumi's graduation was announced. On December 6, 2009, Kusumi Koharu graduated from Morning Musume and Hello! Project. In September of 2011 she became an exclusive model for CanCam magazine. Koharu's graduation as a model from CanCam was revealed on a cover of the magazine in July, 2015.