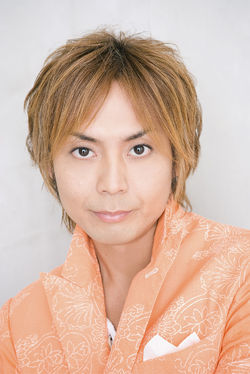 Tsunku (つんく♂) is a record producer, songwriter and composer, singer and vocalist of the band Sharam Q. He is best known for producing the idol group Morning Musume.

Tsunku is the producer of and mastermind behind Hello! Project, TNX, and NICE GIRL Project, as well as producer of some non-Hello! Project acts such as Deka Moni and EE JUMP. He got his start in his music career when he helped formed the band Sharam Q in 1988. He writes nearly all of the songs for his artists. He also releases his own records occasionally, his most recent being "V3~Seishun Cover~". He released two solo photobooks, Tsunku Photo gift in Las Vegas and Hawaii~COOL~ and Tsunku Photo gift in Las Vegas and Hawaii~Natural~, on September 6, 2005. He has co-hosted the TV show Pop Jam and he has his own Web-TV show called Tsunku tv!!! (つんく♂tv!!!).

In June 2006 Tsunku married Idemitsu Kanako (出光加奈子), a 25-year old former model from Fukuoka. His wife gave birth to fraternal twins, one male and one female, in 2008 and another daughter in 2011. Several years later in March of 2014 Tsunku announced that he was diagnosed with laryngeal cancer. He underwent treatment for the condition, and later revealed in April 2015 that his vocal cords had been removed as part of the treatments. His resignation as the General Manager of Hello! Project was made known through the September 2015 release of his memoir Dakara, Ikiru, though he has remained as acting sound producer for Morning Musume and continues to work with the collective in a smaller capacity.