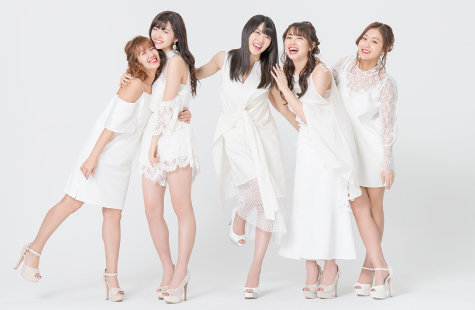 °C-ute was a Japanese pop girl group managed by Up-Front Promotion and was part of Hello! Project. They disbanded on June 12, 2017.

°C-ute's formation was officially announced by Tsunku on June 11, 2005 and would consist of the seven members of the Hello! Project Kids who were not part of Berryz Kobo. In January 2006, Arihara Kanna, a Hello! Pro Egg, was added to the group and made her debut during Hello! Project's 2006 Winter concert tour. For the rest of 2006, °C-ute appeared in several concerts performing original songs which were sold as indie singles. On October 31, 2006, Murakami Megumi suddenly resigned from °C-ute and from Hello! Project; the official reason stating that she wanted to continue her education and lead a private life. The group made their major debut in February 2007 with the single, "Sakura Chirari".

°C-ute had a weekly thirty minute radio show called Cutie Party. It began on October 7, 2006 and aired on FM FUJI every Saturday from 23:00 to 23:30 as the opening portion of Hello! Project Night. In 2008, it was replaced with Cutie☆Paradise. Like Morning Musume before them, at their debut concert each of the group's members were given a color used for merchandise, costumes, and the like. Those colors: Umeda Erika - yellow; Yajima Maimi - pink; Nakajima Saki - orange; Suzuki Airi - green; Okai Chisato - blue; Hagiwara Mai - purple; and Arihara Kanna - red.

°C-ute performed in the 41st Japanese Lyricist Awards (Nihon Sakushi Taisho) in November 30, 2008, along with other Up-Front artists like Horiuchi Takao and Fujimoto Miki. They appeared in the show because the lyricist of Edo no Temari Uta II (Yoshioka Osamu) was nominated (and won). °C-ute performed a short version of ZARD's Makenaide and Edo no Temari Uta II. On December 1, 2008, it was announced °C-ute had won the Excellent Work/Gold award from the 50th Japan Record Awards (Nihon Record Taishou), along with EXILE, Tohoshinki, Koda Kumi and other eight artists. The show was broadcasted on December 30, and EXILE won the Japan Record Award.

On February 26, 2009, Arihara Kanna was scheduled to take a short break for medical reasons (she had developed a bunion). On July 11, 2009 it was revealed that she was leaving °C-ute and Hello! Project to return to the life of a normal girl.

On August 1, 2009, Hello! Project announced that Umeda Erika would be graduating from °C-ute at the end of their current tour on October 25, 2009, in hope of becoming a fashion model. As of April 2010, Erika is officially a model signed to ILLUME.

On March 12, 2011, it was annouced that their performance in Fukuoka and other events has been canceled do to the earthquake and tsunami. Later that year on June 18, 2011, C-ute did a live streaming of their °C-ute Concert Tour 2011 Spring "Chou! Chou Wonderful" concert via Youtube. Besides them, only U2, Alicia Keys and DURAN DURAN had done a Youtube live streaming before, and they were the first Japanese artists to do so.

During a live public recording of their challenge television show in August 2014 °C-ute set the new Guinness World Records for the longest passing of an egg in a relay (1 hour 30 minutes) and the most snacks eaten in relay (1 hour). The records were approved by a representitive from the Guinness organization.

The disbandment of °C-ute was announced on August 20, 2016 through various online and print news sources, followed closely by the official website and blogs of the members. The last performance for the group was scheduled to take place in June 2017 at Saitama Super Arena, during their 12th year of activities. Though the option to continue as a group outside of Hello! Project was offered, the members stated that once their goal of Saitama Super Arena had been reached they wanted °C-ute to end where it started - always as a part of Hello! Project.

The members announced their respective goals after disbandment through their blog on May 27, 2017. Leader Yajima Maimi announced plans to join M-Line and pursue an acting career, Nakajima Saki likewise announced intention to pursue acting as well work through PR and nature focused Satoyama activities. Suzuki Airi revealed that she would continue with her modeling work and return to singing as a solo artist in 2018. Okai Chisato wrote that she intended to mainly focus on television variety and talk shows, but she would also return to singing at some point in the future. Hagiwara Mai revealed her decision to retire from the entertainment business to study abroad and learn English.

On June 12th, they had their final performance at Saitama Super Arena.