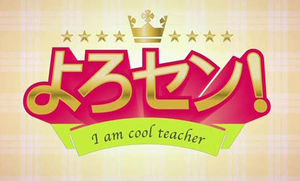 Yorosen! (よろセン!: I am cool teacher? - a slang shortening of "Yoroshiku sensei!") was a late-night daily Japanese edutainment TV program featuring Hello! Project members as teacher and students. It aired on TV Tokyo from 10/06/2008 - 03/27/2009 (weekdays only) with a running time of about 7 minutes. Yorosen! was a replacement for the show Berikyuu!.

Yorosen showcased the 3 main groups of Hello! Project : Morning Musume, Berryz Kobo, and C-ute. Each episode ended with a segment by Mano Erina.

Each week one Hello! Project member would become the teacher to the other members of her group, often dressing in outfits related to the subject matter they were teaching. The subject matter ranged from world leaders to cute animals and everything in between. In a Hello! Project TV tradition, shows relating to food often had the teacher or special student eating the food in question as the fellow members were forced to watch.