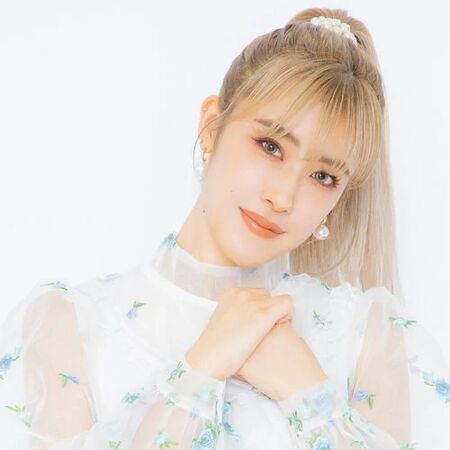 Natsuyaki Miyabi (夏焼雅) is a Japanese pop singer and talent managed by Up-Front Create. She was formerly part of Hello! Project as the sub-captain of Berryz Kobo and was a member of the group PINK CRES.

In 2004, she was one of eight members selected to form Berryz Kobo. Since then, she has become one of the group's main singers and often leads in their singles.

In 2005, Natsuyaki became a member of the shuffle unit Sexy Otonajan along with Fujimoto Miki and Murakami Megumi. The unit was a one-shot unit, releasing their first and last single, "Onna, Kanashii, Otona" within the same year.

In 2007, Natsuyaki became part of Buono! along with Tsugunaga Momoko and Suzuki Airi.

In 2009, Natsuyaki reprised her position as a member of Aa!, with the release of the Hello! Project Champloo 1 ~Happy Marriage Song Cover Shuu~ album.

On February 27, 2014 Miyabi announced that she would take a short break from show business following the indefinite hiatus of Berryz Kobo, but also expressed a desire to continue singing leading her to also prepare for future music activities and possible work involving fashion. Shortly after the hiatus she began appearing as host MC for the web show "GREEN ROOM", where she teased plans for a future group. An audition site for the group was leaked temporarily in June 2015. The audition site was officially debuted on July 1, 2015, with applications being accepted from July 1st to July 31st from girls ages 16-22. No winners came from the first audition, and a second run began immediately with the same rules applied.

The two finalists were revealed in March 2016, during the third segment of training footage airing on April 1, 2016, Miyabi revealed to the girls that they each successfully passed the audition. After beginning activities the group name was later announced to be PINK CRES..