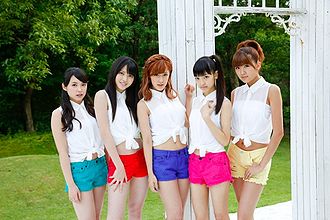 DIY♡ is a Japanese pop girl group managed by Up-Front Agency and part of Hello! Project.

DIY♡ was formed in July 2012 when it was announced that they would perform the original song "Forefore ~Forest for Rest~" (フォレフォレ) at the 2012 Hello! Project Summer concerts. They were formed alongside the group Peaberry to be part of the Hello! Project SATOYAMA Movement, a movement that aims to remind Japan of their beautiful countrysides (Satoyama) and the need to conserve them. The group's name is a common abbreviation for "do it yourself", but in this case is meant to mean "Dance in Yourheart".