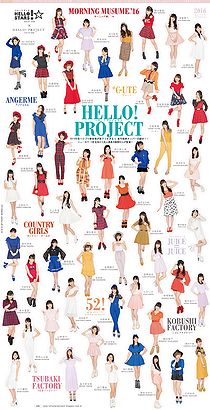 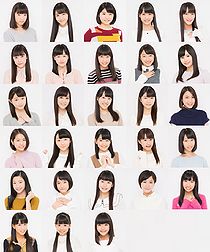 Hello! Project (ハロー! プロジェクト), often shortened to H!P, is the name for a collection of female groups and artists all produced by Tsunku, a member of Sharam Q. Morning Musume is the main group of Hello! Project, with a number of Morning Musume ex-members forming the majority of the solo artists in H!P. Besides the core groups and solo artists that form H!P's line-up, various special units are formed by mixing these groups and solo artists. Shuffle units, usually formed by shuffling all the H!P members into three temporary units, were formed once a year but since 2006 the idea has been dropped.

The group is managed by the Up-Front Agency. Almost all Hello! Project artists' recordings are published by Up-Front Works on either the zetima, PICCOLO TOWN or hachama record labels. But Iida Kaori's Mediterranean styled works are released under the Chichukai label and Maeda Yuki's under the Rice Music label. Country Musume's older work was released on the Potato Label, Coconuts Musume's older works were originally released on the Sony record label, Sheki-Dol's first singles were released on SPREE RECORDS and Heike Michiyo's older works on Warner Music Japan, but they eventually all moved to zetima.

On October 18, 2008, it was announced that all of Elder Club would be graduating on March 31, 2009. Hello! Project now consists of the current members of Morning Musume '18, ANGERME, Juice=Juice, Tsubaki Factory, BEYOOOOONDS (which includes CHICA#TETSU, Ame no Mori Kawa Umi, and SeasoningS), the Hello Pro Kenshuusei Unit, and the Hello! Pro Kenshuusei (and its Hokkaido branch). The current leader of Hello! Project is Morning Musume's Fukumura Mizuki.

Many of the groups/girls in Hello! Project host radio shows or have in the past. They include guest speakers, upcoming release previews, the girls' selected choices of music and often funny radio skits or segments.