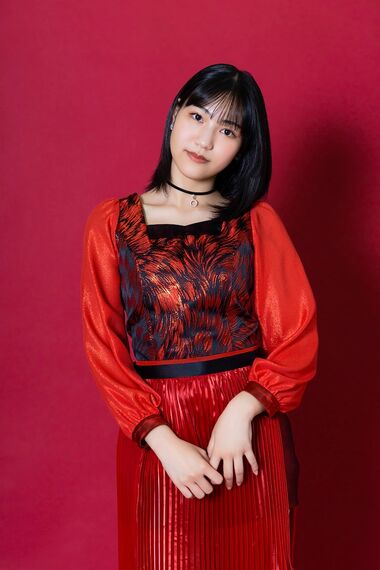 Matsunaga Riai (松永里愛) is a Japanese pop singer and idol managed by Up-Front Promotion and part of Hello! Project. She is a member of Juice=Juice.

Matsunaga Riai acted as a junior model for Dream Girls magazine prior to joining Hello Pro Kenshuusei. During March 2016 she was one of seven girls to recieved the Special Award in the 2016 JuniAward by HarajukuMate modeling competition; the same year in the fall she participated in and failed the "Morning Musume '16 Shinseiki Audition".

On March 6, 2017 she was revealed as a new member of Hello Pro Kenshuusei through an announcement on the official Hello! Project website, alongside Shimakura Rika, Hibi Marina, Eguchi Saya, Doi Rena, Okamura Minami, Yamada Ichigo, and Nakayama Natsume. She made her first live appearance several days later on March 11, at the "Hello Pro Kenshuusei Happyoukai 2017 3gatsu ~Marching!~" event.

On May 4, 2019 she won Best Performance with 419 audience votes during the "Hello! Project Kenshuusei Happyoukai 2019 ~Haru no Koukai Jitsuryoku Shindan Test~" event, for her performance of "Gatamekira" by Taiyou to Ciscomoon. The following month on June 14, 2019 she was revealed to be one of two new members of Juice=Juice, along with Hello Pro Kenshuusei Hokkaido member Kudou Yume, through a special premiere on the group's YouTube channel. Their first appearance with the group would take place on June 17 at Miyazaki Yuka's graduation Budokan concert.