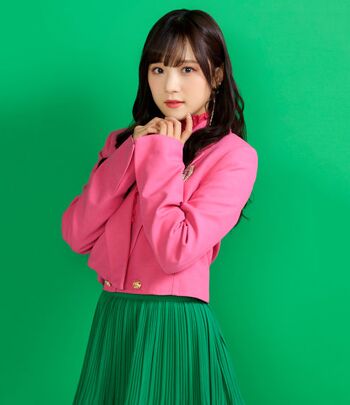 Inaba Manaka (稲場愛香) is a Japanese pop singer and was an Idol managed by Up-Front Promotion and part of Hello! Project. She was a member and sub-leader of Juice=Juice and the leader of Hello Pro Kenshuusei Hokkaido.

Inaba Manaka began training at the EXILE PROFESSIONAL GYM in Sapporo before becoming an idol. She participated in the 2010 "Morning Musume 9ki Audition" but failed to move beyond the third round, and later that year in December 2010 she appeared at the 61st "NHK Kouhaku Uta Gassen" as a backup dancer for the group EXILE.

Manaka passed the Hokkaido Idol Project audition in 2011 and was subsequently added to the group PEACEFUL, where she was given the title of sub-leader. The group released one single on June 8, 2011 and later disbanded on July 31, 2012.

Her first appearance as a member of Hello Pro Kenshuusei took place at the "Hello! Pro Kenshuusei Happyoukai ~Haru no Koukai Jitsuryoku Shindan Test~" event on May 5, 2013. She was introduced alongside Tanaka Karen, Mikame Kana, Fujii Rio, Mashiro Kana, and Inoue Hikaru. The next year on November 5, 2014 she was revealed to be a member of the Country Musume revival group Country Girls with fellow Hello Pro Kenshuusei member Yamaki Risa, and newcomers Morito Chisaki, Shimamura Uta, and Ozeki Mai.

On April 28, 2016 it was announed that Manaka would take a temporary leave from activities after consulting with her doctors regarding a life-long asthma condition. Several months later on August 4th it was announced that she had graduated from Country Girls due to a lack of improvement in her health, though she would stay contracted with Up-Front Promotion and management would aim to find a position for her in the future.

On September 8, 2017 Inaba Manaka's return was suddenly revealed through the Hello! Project website. The official announcement stated that her asthma had stabalized sometime in the Spring and as a result she would resume activities as a member of Hello! Project, starting in the position of Leader of Hello Pro Kenshuusei Hokkaido. She would make her return appearance at the "Hello Pro Kenshuusei Hokkaido Teiki Kouen Vol.4" event on September 18th. In her personal statement she expressed her love for dancing and being on stage, and said reading the comments from fans on her blog encouraged her to work toward making her return.

During episode #247 of the webshow Hello! Station a surprise announcement revealed that Inaba would become a new member of Juice=Juice. A formal announcement followed on the official website, stating that she decided to move back into full-time activities since her physical health had shown no recurring issues since her limited return in September 2017.

Inaba was announced to be a new sub-leader of Juice=Juice, alongside Dambara Ruru, on December 31, 2021 at the Hello! Project Year-End Party 2021 ~GOOD BYE & HELLO!~ Juice=Juice Premium.

Inaba announced her graduation from Juice=Juice and Hello! Project on March 18, 2022, to take place during the group's Nippon Budokan LIVE concert on May 30 during the Juice=Juice CONCERT TOUR ～terzo～ tour as part of the Hello! Project 2022 Spring CITY CIRCUIT. In her statement she said she wanted to learn more about dance, which she loves, and mentioned her interest in cosmetics and fashion and her goal to grow stronger and improve herself.