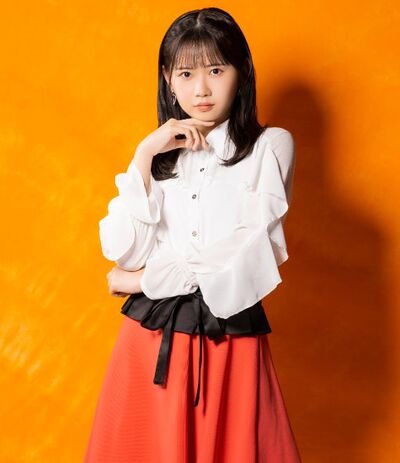 Okamura Homare (岡村ほまれ) is a Japanese pop singer and idol managed by Up-Front Promotion and part of Hello! Project. She is a fifteenth generation member of Morning Musume.

Prior to auditioning for Morning Musume, Okamura was an occasional model for the young girls fashion brand JENNI between 2014 and 2017, and later did some modeling for the brand INGNI First in 2018. At the same time she was attending the Tamakko Bubbles dance school, where she was cast as a dancer in a commercial for "Kotabe" by Otabe in 2015, and later acted in a 2018 Geo's company stage play.

Okamura was selected from the "Morning Musume '19 LOVE Audition" audition to become a 15th generation member of Morning Musume. She was first revealed as a member, alongside fellow audition winner Kitagawa Rio and Hello Pro Kenshuusei Hokkaido member Yamazaki Mei, on June 22, 2019 during a special livestream on the Morning Musume YouTube channel. Their first live appearances would take place during the Hello! Project 2019 SUMMER concert series, and regular activities would begin with Morning Musume's Autumn 2019 concert tour.

On March 10, 2021, it was announced that after complaining of illness over the prior weekend, Okamura was diagnosed with sudden hearing loss and ordered to avoid loud noises while undergoing treatment. As a result she was absent from the March 14 and 21 dates of the Hello! Project 2021 Haru "Kachou Fuugetsu" concert tour, where Tsubaki Factory member Akiyama Mao filled in for her, and the Hello! Project Hina Fes 2021 events on March 27 and 28. Judgement on her future activity would be based on progress made with her doctor.